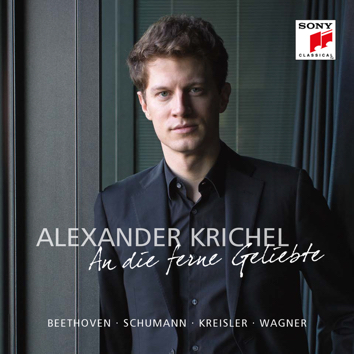 In 1816 Ludwig van Beethoven composed “An die ferne Geliebte”, the first song cycle in music history. Beethoven dedicated it to his friend and patron Joseph von Lobkowitz, who commissioned the work from him shortly after the death of his wife. With this song cycle in the piano transcription by Franz Liszt, Alexander Krichel opens his solo album of the same name, “An die ferne Geliebte”, which revolves around love and longing in music. In addition, he has recorded two more piano transcriptions, Richard Wagner’s “Isoldens Liebestod” and Fritz Kreisler’s “Liebesleid – Liebesfreud”, by Liszt and Sergej Rachmaninov respectively. With Robert Schumann’s “Symphonic Etudes” he has furthermore included one of the most demanding piano works of the Romantic period.

"Amazingly light, calm, transparent. Even in the most agitated passages, his playing remains razor-sharp."

"Krichel brings such earnestness and wonder to the rapture of Wagner’s heroine that we can’t help but succumb to his absorption."